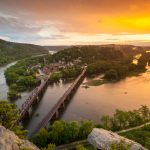 Harpers Ferry was recently named one of the 26 most beautiful towns in America in an article in Conde Nast Traveler! If you’ve ever visited Lily Garden Bed & Breakfast here in Harpers Ferry, you know just how charming our town can be. Here’s what the publication had to say about our little town: “Harpers Ferry has a lot going on, geographically speaking. After all, it’s where West Virginia, Virginia, and Maryland meet, and where the Potomac and Shenandoah Rivers combine. The scenic junction and surrounding Harpers Ferry National Historical Park make for one very picturesque townscape, especially during those leafy autumn months. Meanwhile, the town offers constant historical tours (it was the site of John Brown’s raid) and the... View Article

Following the Civil war there were over 30,000 newly freed slaves in the Shenandoah Valley. Recognizing the need for education, the Freedman’s Bureau, the Freewill Baptists of New England and John Storer came together and Storer College was born. The school survived for 88 years, enriching the lives of hundreds of students. The first building to open its doors to students was the Lockwood House, formerly the U.S. Armory Paymaster’s home. In 1865, as a representative of New England’s Freewill Baptist Home Misssion Society, Reverend Nathan Brackett established a primary school in the war-torn building and began teaching reading, writing and arithmetic to students. From Harpers Ferry, Rev. Brackett directed he efforts of dedicated missionary teachers, who provided a basic... View Article

Following the Civil War, the Reverend Dr. Nathan Cook Brackett established a Freewill Baptist primary school in the Lockwood House on Camp Hill. Brackett’s tireless efforts to establish freedmen’s schools in the area inspired a generous contribution from philanthopist John Storer of Sanford, Maine, who offered $10,000 for the establishment of a school in the South. The donation was offered on the condition that the school be open to all regardless of sex, race or religion. On October 2, 1867, “Storer Normal School” was opened, and two years later, in December 1869, the federal government formally conveyed the Lockwood House and three other former Armory residences on Camp Hill to the school’s trustees. Frederick Douglass served as a trustee of... View Article